Letters, a chance to get closer to your historical heroes 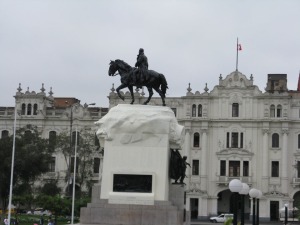 For the past five or six months I have been immersing myself into the history of the South American War of Independence. And I’m wondering why. That subject has no bearing on my next book so I’m not doing research. Also, the word “history” brings to my mind images of textbooks and timelines. It is something I study in school or college, not something I read for fun. Yet, here they are on my tablet: “The Memoirs of General Miller” side by side with a couple of volumes of “The Memoirs of General O’Leary” and Lord Thomas Cochrane’s narrative of his services to the war of independence. And I’ve been enjoying them a lot.
The other day, my sister asked me if I wanted a book about Simon Bolivar for my next birthday. That’s when it hit me that what I like about the books I have on my tablet was that they were not written by biographers or historians but by the very people who participated and lived the war. Reading Bolivar’s letters (compiled by General O’Leary in his memoirs) transported me back to the moment he was writing them. Those were his thoughts in that very instant. Here, there is no 20/20 hindsight of the historian or the knowledge of what lies ahead. He lived this moment and now I was living it with him through his correspondence. I like that proximity, one that is not diluted by scholarly speculation or interpretation. It is the General and I. Period. Being able to read the correspondence of these historical figures also brought out something about them that we tend to forget. Among lengthy military reports, General Sucre asks Bolivar his permission to marry. In another letter, he tags a few lines to let his friend General O’Leary know that a certain lady was unhappy with his (O’Leary’s) conduct towards her. Now I know why I’ve been so into these books: I am discovering the human beings inside the heroes. They were not unlike us. They had their doubts, fears and financial problems. They suffered disappointments and losses. They fell in and out of love. They had dreams. So the next time I happen to visit any of the plazas bearing their names and look at their bronze statutes high on their pedestals, I will remember that they too were ordinary people doing extraordinary things.

Never cease to explore and tell!

Portraits of a Ghost
Story Life

The creative journey to becoming an author

Welcome to the world of cats!

My Invented Isabel
Writers In The Storm Blog

The Art and Craft of Blogging